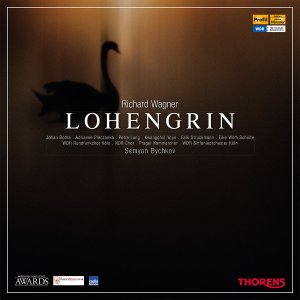 This recording was made immediately following two concert performances in Cologne. Yet the origin of this collaboration goes back several years to concerts in Spain, and a new production at the Vienna State Opera. These projects enabled everyone to become completely immersed in the blending of ideas and individual experiences that collectively informed the building of the Lohengrin cathedral. According to the wishes of Wagner ‘Give the opera as it stands, without cuts’ as expressed in his letter to Liszt on 2 July 1850: the opera was performed and recorded complete.

After the premiere of Lohengrin in Weimar on 28 August 1850 - which Liszt conducted, and Wagner as persona non grata was unable to attend - reports arrived describing the event. The performance had taken a lot longer than Wagner had ever imagined. Upon reflection he realized that Liszt had allowed the singers to follow the German operatic tradition of the time, and more or less do the recitatives as they wanted. On 8 September 1850 Wagner wrote to Liszt ‘I have been at pains to take account of the spoken emphasis of the words so precisely that it should be necessary for the singers simply to sing the notes exactly according to their written value at the given tempo, in consistently lively fashion.

The LP can be acquired through authorized resellers and Thorens distributors.