When the times were a-changin 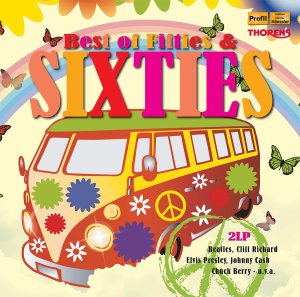 Music as a reflection of its time – we’re all familiar with that imagery. But when you take a closer look, it’s a gross over-simplification. A piece of music, or a group of related pieces of music, as a reflection of one aspect of a certain period – that would make better sense, but in our age of ultimate simplification (believe it or not) we fight shy of such nuanced
and often complex categories.

The great American songwriter Bob Dylan may have had that in mind over 50 years ago when in his infinite wisdom he gave the title song of his third LP the refrain “The Times, They Are A-Changin’”. And so they are. We’re really rather pleased we can include this song on our double album. It is a splendid motto for the times we cover here: a musically vast decade stretching from 1955 to 1964. And while we are on the subject of simplification: the key words of this pop decade – and thus for these four LP sides – are rock’n’roll, folk, beat and soul. Each of these styles boasts its giants, and many of them are gathered together here. They stand out above all because while shaping “their” style, they generally developed and refined both it and themselves further. It wasn’t just the times but the artists and the styles that were changing, and there was a complex interaction between these elements.

The LP can be acquired through authorized resellers and Thorens distributors.